ELIZABETH I IN HISTORY 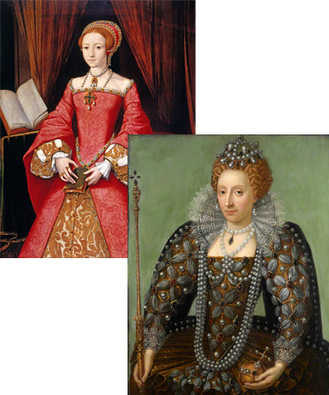 Since her death in 1603, public opinion has been divided over many of Elizabeth’s choices, strategies, and actions. But there is one point upon which all are united: As a leader, and in the management of political, social, and economic affairs, she was a woman of extraordinary talent and tenacity.

She combined, to a remarkable degree, patience and prudence with steadfast resolution and action. Elizabeth was described, by her enemies, by her people and by various heads of state, as being “uniquely inspiring”.

She reigned for forty-five years. During that time, all of Europe was torn over the question of Catholic or Protestant supremacy. The predominance of power was with the Catholics, a power that was hostile to Elizabeth. Also hostile to Elizabeth was her cousin Mary, the Queen of Scots. Mary challenged Elizabeth’s right to the English throne, and she was supported in that claim not only by the Catholic heads of state, but by most Protestant leaders as well. This very public support of Elizabeth’s rival created great divisions of both loyalty and sentiment amongst the English people, a division that threatened to escalate into civil war.

Yet despite all of this hostility and turbulence, and despite the fact that public opinion was most often against her, Elizabeth maintained both the poise and the presence of a confident and effective leader. She raised the status of individuals in the realm, which, in turn, raised the status of England as a nation. By the end of Elizabeth’s reign, England was not only the most powerful nation on earth, she was also the richest. But her riches went far beyond wealth. England, thanks to Elizabeth’s leadership, also became rich in culture, art, education, innovation, and promise.